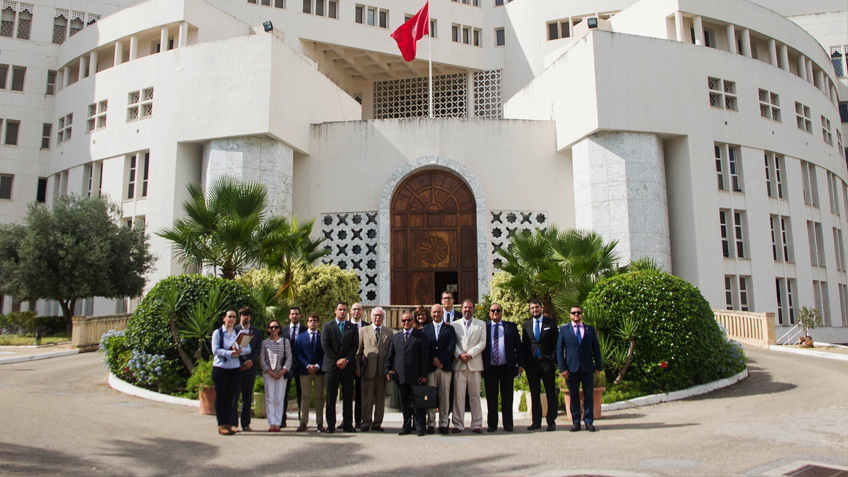 Visit to the Tunisian Foreign Affairs Ministry as part of the field trip to Tunisia by students of the Master’s VII promotion.

During the visit, the Tunisian political situation was analyzed, as well as the bilateral relations with Spain and the EU.

On behalf of the Secretary of State of Tunisia, he welcomed the Foundation FESEI, and the excellent historical relations between the two countries, based on the mutual respect and the common interests were stressed. The Director-general indicated that today, after the Tunisian revolution, these relations have been reinforced, sharing the same values: freedom, fundamental rights and defense of the democracy.

Both Tunisia and Spain, they belong to the Mediterranean geostrategic environment, and from Tunisia, it is wished this space to be a space of cooperation, of tolerance and of peace.

The challenges that are sent from the Ministry are common challenges: military and economic, that simultaneously are global.

“We have to, therefore, find the solutions adapted to the global problems. The big challenge, in our opinion, together with terrorism is the economic development. If there is no political, social and economic development, an unstable environment will take place. It corresponds to our institutions; Diplomatic Institute and FESEI, to reflect on these questions”, pointed out Raouf Chatty.

“The relations between the two countries have always developed in a positive sense. In this sense, we are impatient to see a new Government in Spain, to recapture our contacts and to recover the rhythm of exchanges that has always characterized the bilateral relations between Tunisia and Spain”.

The Director-general for Europe, emphasized that our nations meets themselves in many other Forums, how, for example, in the process of Barcelona that turned into that of the Union for the Mediterranean, and also the dialogue 5+5.

Tunisia is in a transition phase, but he stressed that now they have a Constitution and democratic Institutions. Nevertheless, in these moments they struggle with big economic difficulties. Unemployment reach to 650.000 people, 30 % of them are university postgraduates. It is for it that they ask for help “from our friends of the EU”. The deputies of the PE have approved a resolution raising a Plan Marshall for Tunisia. From Tunisia, one believes that it is a very good resolution that will allow them to go out of this difficult situation that threatens its future and its democracy, the only one n the Moslem Arab world.

Therefore, from the Ministry, they consider that Spain might its lawyer and spokesman in the EU, so that the idea of the Plan Marshall is a reality in favor of Tunisia and so that in the first meeting EU – Tunisia that is going to take place next December 1, 2016 would be successful, and they also expect a big participation of Spain within the frame of the meeting of investors and donors foreseen next November 20th and 30th.